Based at the foothills of the Southern Alps, there are few scenic alpine courses like it. The golf course at Terrace Downs is fun and challenging for all golfers, from the first time novice to the aspiring professional. Discover just what it is that makes Terrace Downs such a popular venue when it comes to golf courses in Christchurch and the entire Canterbury region!

Play on one of the country’s most exquisite golf courses

Situated in Christchurch in the heart of Canterbury, Terrace Downs Golf Resort is ranked as one of New Zealand’s top five golf clubs for its course layout and is the only high country course to make the grade. Designed by Sid Puddicombe, the 18-hole par 72 championship course is 6,406m (7,006yds) long. The Parkland style front 9 course is sheltered with a ‘Woodland’ feel. The links style back 9 course is described as having a ‘Scottish’ feel with its open and tranquil setting.

Since its official opening in 2001, the course has continually received countless international and national accolades. Terrace Downs is one of few golf courses in New Zealand to be accredited as a Qualmark Activity Provider, assuring you’ll receive and experience only the highest quality throughout your visit.

Terrace Downs Golf Course is ranked as one of New Zealand’s top five for layout and is the only high country golf course to make the grade. Professionals describe the 18-hole par 72 course as challenging for all golfers, from the first timer to the aspiring professional. With its open and tranquil setting, the links back 9 style course has been described as having a ‘Scottish’ feel.  The Parkland front 9 style course is more sheltered with a picturesque ‘Woodland’ feel.

Whether you want a weekend away in with friends or some quality family time exploring Canterbury, we can cater to golf holidays of all designs. We offer luxury accommodation so you can wake up every morning to the sight of the lush green plains draped in breath-taking scenery, and finish every day with stunning views of the sun setting on the glimmering lake as you enjoy a spot of fine dining in the clubhouse.

Along with the course, a driving range is available for practice before your round, or just as a fun family activity. We also offer a range of other activities to indulge in such as horse riding, skiing, and archery!

If you would like to find out more about how to book golf holidays in Christchurch with one of the leading golf clubs throughout the Canterbury region, or if you are interested in how you can hire our venue for weddings and other events, please get in contact – phone, email, or fill out our online enquiry form. 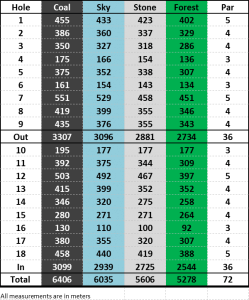 Green: 130 | Stone: 126 | Blue: 130 | Black: 130
Please note that our resort has a STRICT NO ALCOHOL POLICY ON THE GOLF COURSE that will be enforced. Please do not bring your own alcoholic beverages for your golf round as action will be taken. Alcohol beverages can be purchase before, mid-way and after your round in the clubhouse only. The resort management thanks you in advance for your cooperation.

The fabulous Clubhouse at Terrace Downs provides golfers supreme comfort and convenience both before and after a challenging round on the 6,406 metre (7,006 yards) long course.

The well-equipped Pro Shop stocks a wide variety of apparel and golfing accessories with the latest equipment for hire.

After your round, take a shower in the luxuriously appointed changing facility then head upstairs to admire the mountain vistas while sipping your favourite wine. Our clubhouse offers complimentary WIFI for you to enjoy while you are here as well.

We have some new and exciting golf tournaments planned at Terrace Downs Resort so please keep an eye on this page for the latest!

Becoming a Member at Terrace Downs offers lots of great benefits. We have a range of options available to suit all kinds of player.

The Gold Membership is the ultimate option for those who want to be truly connected to the Resort and Golf Club.Gold Memberships start from $1,500 and provide full access to all resort sporting facilities, discounts throughout the resort, a New Zealand handicap, reciprocal access clubs and special gifts.

The Silver Membership is an affordable option for those who simply love to play golf on the amazing Terrace Downs golf course. Silver Memberships start from $750 and provide unlimited green fees for the year. All Members have access to our monthly and quarterly members-only tournaments.

Corporate membership packages are also available. For an annual fee of $8,000+GST, your business can host its own private tournament. Your staff will also get great discounts for golf and accommodation at the resort, and four individuals will hold membership cards that entitle them to a free round of golf for four players, once per month.

Tuesday 14 September 2016, Tennis New Zealand has officially announced at the Davis Cup Reception held in Christchurch that The Terrace Downs Resort has just signed up as the official naming sponsor of New Zealand Davis Cup Tennis Team for the 2nd year. Koji Kawamata, General Manager says “It gives me great pleasure to see that young talented team members proudly wear the national team uniform and play so hard to bring win to the country.  I’m a big fan of them and glad to be the naming sponsor for another year.”

Terrace Downs Resort is proud to be the main prize sponsor for the Tuesday’s Fast Four Competition at the Ashburton Trust Tennis Centre. This competition is a Tuesday doubles event and runs over summer.

Peter is 57 years of age and was born in Hornsby, New South Wales, Australia but now has residence in New Zealand. Hi is 6ft 3inches.

Peter turned pro in 1977 and has 14 professional wins to his name the most famous victory came at the Australian Open in 1983, he has spent a large part of his career on the European Tour and won the BMW International open in 1993 where the runner up was Ryder cup captain Ian Woosnam. His best finish at a major championship was T22 at the Open Championship in 2003.

Terrace Downs Resort is proud to have Michael Venus, a professional tennis player as their official ambassador. This was due to the hard work of General Manager Koji Kawamata, Michael will wear shirts with the Terrace Downs logo patch and play in ATP tour from a clay court season 2017.

“I’m delighted to join Terrace Downs as the ambassador to such a magic resort. A most beautiful destination with breath-taking views of the Alps and a golf course to match the views. I’m honoured to be chosen as their ambassador.”

Terrace Downs Resort are proud to announce that we are the winners of the Best Golf Hotel 2015 for New Zealand at the annual World Golf Awards held in Portugal on Saturday 7th November.

General Manager Koji Kawamata says “It is a great honour to win this award, we are all very proud that our hard work has been recognised at this level.”

This is also a great achievement for Canterbury Golf with Clearwater Golf Course also winning the Best Golf Course award.

Terrace Downs was voted the top golf resort in New Zealand in the 2010 World Travel Awards. Offering guests an 18-hole championship golf course, this challenging par 72 course offers a choice of four tees on each hole and incorporates 10 lakes and over 60 bunkers. The spectacular views pose a constant challenge for players to keep their eye on the ball! Terrace Downs also features deluxe accommodation, a selection of dining areas serving signature high country cuisine, and a range of unique high country activities.

Junior Players – 50% off the adult green fee for players under 18 years of age.

Golfer’s Lunch – $20 for a steak sandwich and tap beer.

Our summer hours are 8am to 6pm and winter hours 9am to 5pm.

Cancellation Policy: Golf tee time cancellations will not incur any penalty. If you are unable to keep your tee time, we appreciate you informing us of this but it is not compulsory.

Group Bookings: We are happy to help arrange your larger group booking or tournament. For groups of 13+, one green fee per tee time bookings are required. This deposit cannot be refunded (no exceptions) but may be held and placed as deposit for a new booking within 6 months of the original reservation.

Please note that our resort has a STRICT NO ALCOHOL POLICY ON THE GOLF COURSE that will be enforced. Please do not bring your own alcoholic beverages for your golf round as action will be taken. Alcohol beverages can be purchase before, mid-way and after your round in the clubhouse only. The resort management thanks you in advance for your cooperation.